I'm so excited today to post this interview with two authors who have crafted an important book about food, hunger, and climate change/action. Christy Mihaly and Sue Heavenrich wrote Diet for a Changing Climate. 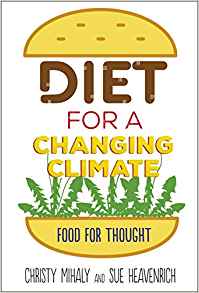 Thanks, Christy and Sue for taking the time to answer some questions about this unique book about climate action. Let's dive right in.

Diet for a Changing Climate offers a very unique look at climate action. What was the spark for writing about this topic?

Long ago (in 2014), two writers (who happened to be critique partners) each independently had the same idea: “I’d like to write a book for kids … about eating insects!”

Sue ’s inspiration sprouted in her vegetable garden in upstate New York.  While knocking Japanese beetles off her tender plants into a bucket of soapy water, she pondered whether that pile of insect protein might be edible. For humans. Sue’s mental gears kicked into motion and she began scribbling ideas for a children’s “field guide to eating insects.”

Meanwhile, over in Vermont, Chris was interviewing a local environmental activist for a magazine article. This young woman was an entomophagy advocate who hosted public bug-eating dinners, at which she emphasized the environmental and nutritional benefits, as well as the tastiness, of eating insects. When Chris researched the topic and learned about the UN’s longstanding advocacy of entomophagy, she was seriously intrigued.

That summer, Sue and Chris attended a nonfiction conference together. Chris told Sue she’d submitted a proposal, “Entomophagy ABC’s”… which received a tepid reception. “No way!” Sue said. “I’m working on an entomophagy book.” We decided to collaborate. We developed a joint proposal and submitted it for a critique at a conference a year later. The editor passed on the project but was encouraging and offered helpful suggestions. To celebrate, we (Sue and Chris, not the editor) split a pack of—you guessed it—roasted crickets!

Well, that's an interesting way to celebrate. What happened next?

After more revisions, Chris submitted our new-and-improved proposal at a 2016 conference. The third time was the charm! Domenica DiPiazza of Lerner/Twenty-First Century Books loved our idea. But we needed to broaden our scope beyond entomophagy.

We wanted to write about climate change, and to excite young readers about climate-positive actions they could take. So, we expanded the book to discuss how human food systems affect the climate, and how dietary changes could reduce carbon emissions. We decided to cover a range of dietary options, figuring most people are more open to eating weeds than munching insects.

What challenges did you face conducting the research for this book?

A major challenge was the recipes: putting our mouths where our writing was. Dandelions weren’t a big deal, but crickets and Japanese beetles took some devotion to the cause. The recipes required trial and error and reaching out to more experienced and creative chefs.

Some information was tough to find. We needed to develop reliable food safety guidelines, for instance, tips for safely eating weeds in a city. And because it’s a new field in the U.S., it was difficult to locate companies producing insects for human consumption.

In addition, eating any kind of animal can be a difficult subject. Sue, as an entomologist, has a deep appreciation of, and love for, insects. We spent a great deal of time discussing and researching humane ways to catch and kill bugs (freezing them is good).

The overall challenge was developing the deep understanding necessary to explain the relationships between food and climate change: making sure we had connected the dots correctly.

Did anything in your research surprise you?

We were surprised by how many people are already eating invasive species and insects. We had known there were scattered forward-thinking individuals out there but hadn’t realized the extent of entomophagy and invasivore Facebook groups, websites, associations, restaurants, courses, conventions, cooking events, and more.

We also were struck by the grave environmental and economic problems presented by invasive plant and animal species. And … how many invasive species and insects make for really good eating.

Yum. Do you have any words of wisdom for people who struggle with understanding human involvement with climate change?

Students around the world are planning a global day of action for March 15: a Climate Strike. Young people know that if our inaction continues, they will be faced with a climate disaster.
It is scary to think that our actions have changed the global environment so drastically. Rather than just sigh and hope for the best, however, we encourage people to read good science. Look at the data on temperature rise. Study the graphs showing how much carbon has been added to the atmosphere since the Industrial Revolution, and compare that to carbon levels over Earth’s long history. And consider that a huge majority—nearly 97 percent—of scientists engaged in climate research agree that human activity is causing climate change.

Whether or not you’re convinced that humans have caused the crisis, don’t let uncertainty prevent you from taking steps to address the changing climate and make our world a better place to live.

Nice advice. Action is always better than inaction. What comes next for both of you?

Meanwhile, Chris recently completed a series of six books for an educational publisher dealing with political issues including climate change. She is working on a fun project for National Geographic Kids. And she has a few picture books in the pipeline—both nonfiction and fiction—including a poetic introduction to the First Amendment, Free for You and Me, scheduled for publication with Albert Whitman in the spring of 2020.

Sue just finished a couple of books for an educational publisher and is outlining some new projects. She has a nonfiction picture book, Thirteen Ways to Eat a Fly, scheduled for publication with Charlesbridge in the summer of 2020. Sue writes a bimonthly science column and volunteers as a citizen scientist, collecting data on native pollinators. She also helps coordinate her local SCBWI Shop Talk group.

Thank you both for sharing your book with us today. I'm sure this is one that will fascinate readers and boost a lot of discussions.

If you would like more information about this book, check out the publisher's page. 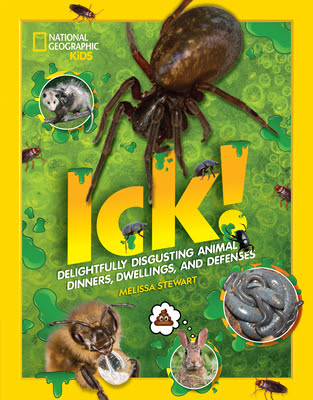