I am so excited to spend some time this week reading! I've finished two very hectic months of book festivals, conferences, and school visits, and now I can settle back into spending time researching my next Houghton Mifflin title and READING!

On my list -- I just purchased Lab Girl by Hope Jahren. Even though I spent years researching THE STORY OF SEEDS and spending time with botanists and other seed scientists, the subject will stay with me forever. And this book looks beautiful.

Following that theme - I'd love to read Elizabeth Gilbert's Signature of All Things. These three would make a great trilogy!

On the kid lit front:

I also downloaded the audio book of The War That Saved My Life by Kimberly Brusker Bradley. This book has been on my TO READ list since it came out. I am so happy to have the time now to listen to it. What brings me back to this blog?  A new report on GMOs has been released by the National Academies of Sciences, Engineering, and Medicine on genetically engineered crops.  This quote was cited on CBS This Morning: "...no substantiated evidence that foods from GE crops were less safe than foods from non-GE crops." Monsanto and other companies selling GE seeds are basking in this validation.

But, it also determined that genetically engineering crops did not produce substantial yields as the companies promised.  This was the main reason for producing them in the first place.
So, both sides are claiming a victory here.

But there is a bigger picture --  the impact of GE crops on our environment.  The impact on biodiversity is vast.

Most of what we eat is genetically modified -- 90% of US corn, soybeans, and sugar beets.

And what about labelling? We still deserve to know what we are eating and the ability to make our own choices.

I feel like we are race horses with blinders on speeding ahead without looking around us. My only hope is that this, and other studies, further our discussion on this subject.

Read more about genetically modified seeds in THE STORY OF SEEDS: From Mendel's Garden to Your Plate, and How There's More of Less To Eat Around The World. 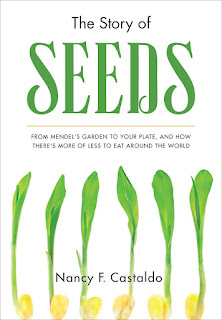