For those of you who have read SNIFFER DOGS: How Dogs (and Their Noses) Save the World, you already know how awesome these dogs are at their respective detection jobs. Every day they are working with law enforcement, military personnel, and private citizens to make our world a better place.

One of these awesome sniffers recently appeared in the television documentary series, American Ripper. Zuma and Donna Randolph were brought in to help the investigation of a very old case. It was such a treat for me to watch the pair at work again. I hadn’t seen Zuma in the field since I met up with her during my Sniffer Dog research in 2012.

Thanks, Donna, for sharing the story of this experience with us now!
Zuma has been on so many cases. How did this one, for a documentary tv  investigation, compare with the others?

This was a very difficult search which I expected to yield no results.   The area was affected by so many things.   First, since the crime took place 120 years ago, new houses were built, the original house was moved, modern roadways were constructed, and modern utilities were installed.  That made most of the area nearly impossible to search.   Not only that, there were many feral (not pets but free roaming) cats living in the area and they were all interested in what Zuma was doing.  In addition, many of the yards we searched were either “owned” by other dogs or they had many beautiful flower beds.   We had to negotiate cat relations, dog relations,  be careful not damage any flowers, and search in difficult conditions. This was by far our most difficult and stressful search ever.   Being filmed while you worked added even more to our difficulties.   So many different scents to work through and sort for Zuma, including working around and with the film crew, not to mention street traffic, a yard with chickens in a chicken coop, and many more distractions.

Did she have to do multiple takes for her scene?

Yes, we did. Once she discovered an actual source, they filmed it from different angles.   She was very happy to perform over and over for her toy reward.

Forensic canines have the ability to find old bones, even fragments. *spoiler alert* Were you able to be on the set while the archeological team came to dig the area where Zuma alerted?

No, we were home during the dig.   I wish we could have been there to help with digging and sifting.  We could have worked with the archaeologist to help shrink the search area.  I did know the days they were digging and I got a hint of a possible find but no details or idea of the significance.  That made viewing our episode very exciting.

Has Zuma continued training every week for her job?

Zuma trains 5 to 6 times a week.  However since the airing of the show she has gone almost completely deaf.   So she now works on leash so we can communicate better.  She is almost 12 years old and is still eager to work.

That is dedication  - both on her part and yours!
This was a fascinating case for Zuma. I’m sure it brought more attention to the skills of this special type of detection dog. Can you share another case that might interest young readers?

Zuma and I were able to travel to Canada.  She was asked to search a battlefield for buried soldiers.  At Grande Pre, she showed a group of students how Historical Human Remains can be discovered from the 1700's without digging.  We used oral and written history to determine a search area to work.   It was all about reading special old maps,  to determine were the roads were and signage.  The distance from the sign and along the older roadway were determined and that is where she searched.   I love history and we were able to further make it historic by searching for these American soldiers in Canada on Memorial Day.  It was a very memorable and special search for us.

Thank you, Donna and Zuma, for your dedication and amazing skills. It’s fascinating to follow your work.

You can learn more about these special detection dogs at Institute for Canine Forensics and read more about Zuma and Jax in SNIFFER DOGS (HMH)   - now in paperback at your local bookstore. 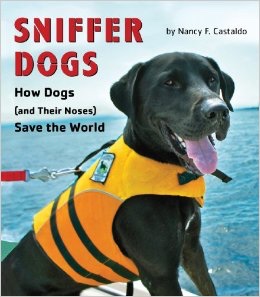 Visit to The Bennington Free Library

Authors love to visit book shops. That's a given. But we also love visiting libraries. In fact, nonfiction authors LIVE in libraries. We are always visiting libraries for our research. That said, I thought I'd share some fun library visits with you, my readers! These libraries are unique and special for many different reasons. The first one I am highlighting is the Bennington Free Library in the lovely town of Bennington, Vermont. 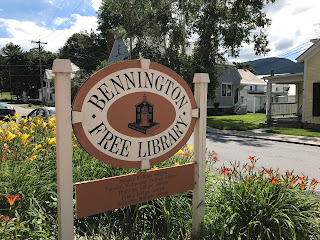 I kew this was going to be a special place as soon as I approached the door. 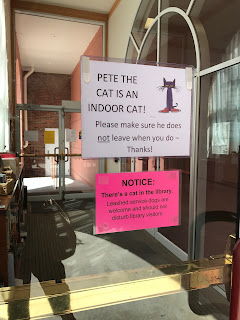 A library cat! YAY! I couldn't wait to enter and say hello to Pete! 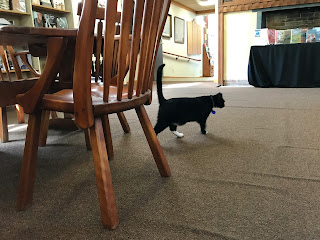 Pete was pretty busy making the rounds through the library while I was there doing some research, so I didn't disturb him.

I did spend some time chatting with the librarian at the desk in the children's room. WOW! What a great space with a great collection, including a fantastic STEM display and activities. 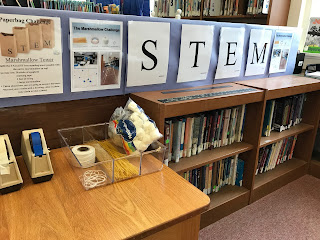 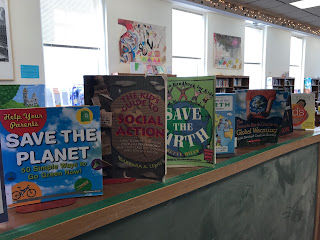 Check back as I post other wonderful library visits from around the country!
at August 16, 2017 No comments: