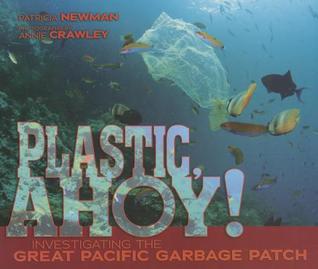 Whether you're taking a cruise, swimming in the ocean, or having a tuna sandwich at your next picnic, the ocean impacts all of our lives. More of our world is covered by ocean water than land. Author Patricia Newman has written an engaging, thought provoking book for kids about the plastics that have invaded our seas.

I had the opportunity to find out more about the complexities of writing this book and the way it can be used in classrooms on a recent chat with the author!

Thanks, Patricia, for being with us today and talking about Plastic Ahoy! The book brings a very huge dilemma to readers. What was the inspiration for telling this story?


The inspiration for PLASTIC, AHOY! started with an article in my local newspaper about graduate student scientists and volunteers who boarded a research vessel in August 2009 to sail to what the media calls the Great Pacific Garbage Patch. The Garbage Patch was first discovered by Captain Charles Moore, but until 2009 it had not been scientifically studied. This expedition funded by the Scripps Institute of Oceanography and Project Kaisei would be among the first. While I followed the expedition blog, several facts and fragments coalesced into a possible book idea—the age of the scientists, the open ocean adventure, the “first-of” nature of the expedition and the fact that we had the power to reduce ocean plastic. I traveled to San Diego to interview some of the scientists after they returned to shore and I knew I had a solid idea.

The researchers in the book spend countless hours at sea. Can you tell readers about your own research for this title?

I proposed to my editor a nonfiction picture book for grades  3 through 6, so I had space constraints to deal with, i.e. 3,500 to 4,000 words of text. Seven graduate student scientists gathered observations and data for later research based on this expedition, but I knew that I did not have space to discuss all seven. I printed the expedition blog (all 21 days of it!) so I could highlight and annotate. I chose scientists whose work would feature different facets of ocean plastic: Miriam Goldstein (the lead scientist) focused on the rafting community—the little critters who hitchhike aboard plastic; Darcy Taniguchi studied phytoplankton—microscopic plants that provide the oxygen for nearly two out of every three breaths we take; and Chelsea Rochman studied the chemistry of plastic and how contaminants leach out of plastic and also adhere to it.

I interviewed each scientist for several hours, studied up on the scientific terminology surrounding ocean plastic, watched expedition photographer Annie Crawley’s gorgeous videos of the expedition, and read everything about ocean plastic that I could find, both online and in print.  It wasn’t until I started writing that I realized I had chosen three female scientists, which lent an element of “girl power” to an already powerful STEM concept.

Did you experience any challenges in writing this book?

Every book I write comes with its own set of challenges. For me, the hardest part of any nonfiction project is deciding which format is best suited to my story. I chose a narrative format for two reasons—the plastic floating in the ocean is mysterious and that sense of mystery lent itself to storytelling. At the time I wrote the book, we didn’t know much about ocean plastic. The expedition was the epitome of the scientific method at work because the scientists went to sea armed only with questions. They didn’t know what they would find. The second reason I chose a narrative format was because I wanted to include specific information about each of the three wonderful scientists that I met. These women love science and I knew their passion would not only engage young readers, but hopefully interest them in science.

Plastic, Ahoy!’s message poses another challenge. The process of research and writing this book changed the way I look at the ocean and how the products I buy affect it. One of my goals in writing the book was to build a strong case for cleaning up our oceans and rivers and showing readers how to become more ecologically responsible. Now that readers are interacting with PLASTIC, AHOY! I hope they will change their own habits and help spread the message.

The photographs in Plastic Ahoy really bring the story to life. Can you share with us your working relationship with photographer, Annie Crawley?
Annie Crawley  and I met because of Plastic, Ahoy! (Actually, we still haven’t met face-to-face, but we talk on the phone a lot!) I contacted Annie after the expedition returned to shore to be sure she was on board with the project. She and I scrolled through thousands of images and video of the expedition looking for just the right shot, the right angle, the perfect photo that showed how scientists lived and worked on board New Horizon. Annie’s photos capture the enormity of the plastic problem. She also used her award-winning video talents to create our dynamite booktrailer .

Annie is tireless in her defense of the ocean. She’s a noted ocean speaker, a member of the Women Divers Hall of Fame and the CEO of Dive Into Your Imagination. Annie runs dive camps for kids and photography camps for any age. I am so lucky to have her photos grace Plastic, Ahoy! and we look forward to working on another project together (we have two ideas we’re currently considering).

This book hits on some important core curriculum standards. Any suggestions for using it in the classroom?

I used to teach remedial math to high school students, so I understand that real world examples can facilitate learning. In addition to cutting-edge information about ocean plastic, PLASTIC, AHOY! provides a fabulous segue to the scientific method. My Teacher Guide <http://patriciamnewman.com/CCSSPlasticAhoyGuide.pdf> (http://patriciamnewman.com/CCSSPlasticAhoyGuide.pdf <http://patriciamnewman.com/CCSSPlasticAhoyGuide.pdf> ) is aligned with the Common Core State Standards and the Next Generation Science Standards. The guide contains a variety of activities that stress vocabulary for the ocean and the scientific method; the ocean food web and how energy is transferred to each organism; forming a hypothesis; and (my favorite) a math activity where students conduct a waste audit analysis of their homes. The last few pages of the activity guide lists in table form the CCSS and NextGen standards covered by each activity.

What’s next for your readers?

Four nonfiction novelty board books will be released in the fall of 2015 and spring of 2016. I love these books and am very excited to see how the parents of toddlers react to them. Additionally I have several projects—both fiction and nonfiction—that have just been submitted for an editor’s consideration or will be submitted soon.

Thank you, Patricia! This has been great. Plastic Ahoy! is a must for classroom bookshelves. It seems like this topic appears again and again in the news. Thanks for providing readers with a good resource!

Find out more about Patricia's books at http://www.patriciamnewman.com
at July 09, 2014 No comments: