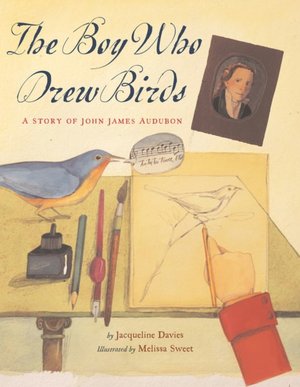 Anyone who has ever picked up a bird guide certainly knows who John James Audubon is….don't they? Well, they know he stuffed a lot of birds and made beautiful drawings of them, but there is so much more to this great naturalist.

He loved birds all his life and said,"When I had hardly yet learned to walk, and to articulate those first words always so endearing to parents, the productions of Nature that lay spread all around, were constantly pointed out to me. They soon became my playmates; and before my ideas were sufficiently formed to enable me to estimate the difference between the azure tints of the sky, and the emerald hue of the bright foliage, I felt that an intimacy with them, not consisting of friendship merely, but bordering on frenzy, must accompany my steps through life."


Jacqueline Davies captures that boy in her book, The Boy Who Drew Birds, beautifully illustrated by Melissa Sweet.  It's the perfect read to pull out on Audubon's birthday and any other day you'd like to inspire a young person's creativity and love of the outdoors!

Biodiversity and New York City.  You won't hear those words too often in the same sentence, unless you are talking about the lack there of.  Well, last week that changed.  Thanks to my writer friend, Loree Griffen Burns, I was alerted to news of a new frog species.  I am always excited about any discovery of a new species, especially since most are discovered in a rainforest.  But this time I was over-the-moon excited and immediately posted the article on my Facebook page…. This new frog species was not found in a rainforest, but an urban setting right here in my very own state!  It was found in New York City.  New York City, were the population of pigeons outnumbers every other species and the biodiversity among people is far more interesting to that of wildlife!

The frog is a type of leopard frog, in a beautiful shade of green, with it's own distinct call.  In fact it was it's call that got it noticed!

I have thought about the discovery of this frog for days.   When I wrote Keeping Our Earth Green I was bogged down with oodles of daunting issues.  And it was challenging for me to write ways that would encourage kids to make a difference.  I had to constantly focus my brain on the hope for the future.

This little frog did that for me this week like nothing else has!  If something new and special can be found amidst the urban wilds of New York City, then why not everywhere else?  Why shouldn't we get as excited about our own backyards as all of these other exotic and bio-rich locations?

The winners for this year's Newton Marasco Green Earth Book Awards are:

*   101 Ways to Save the Planet, written by Deborah Underwood
(published by Raintree)

*   Human Footprint: Everything You Will Eat, Use, Wear, Buy, and
Throw Out in Your Lifetime, written by Ellen Kirk (published by
National Geographic Books)

*   Luz Sees The Light, written and illustrated by Claudia Davila
(published by Kids Can Press)

*   Nowhere Else on Earth:  Standing Tall for the Great Bear
Rainforest, written by Caitlyn Vernon (published by Orca Book
Publishers)

Congratulations to all the recipients! 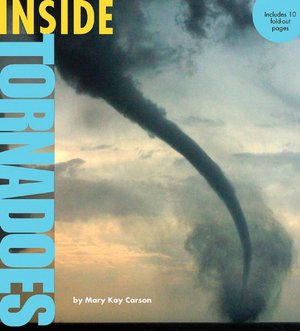 Every spring we face tornado season in our country.  It's scary, especially for kids.  They are random or least they seem that way.  I don't even live in tornado alley and yet have seen the effects of a tornado just a few miles from my house.

How do these horrible winds form?  Why is there a "tornado alley"?  How do you protect yourself?  These questions and more are answered in Mary Kay Carson's book, Inside Tornadoes.

As with all the books in the Inside series, it is an informative, interactive read.  First person accounts, diagrams, pull-out pages, and full color photos make it a great resource for kids and adults.
at April 04, 2012 No comments:

Email ThisBlogThis!Share to TwitterShare to FacebookShare to Pinterest
Labels: Inside series, nonfiction, tornadoes

It's National Poetry Month!  How could I not blog about one of my favorite poets, Joyce Sidman?  Her natural subjects are brought to life by beautiful poetry in clever collections for kids.


One of my favorites, Ubiquitous, is an absolute treasure.  Sidman and illustrator Beckie Prange are the creators of the Caldecot Honor Book Song of the Water Boatman & Other Pond Poems.  This picture book, delving into nature's survivors including, the gecko, grasses, diatoms, bacteria, coyotes, and humans, does not disappoint.  Sidman's poems are eloquent and are accompanied by rich, scientific notations.  Prange's illustrations (linocuts, hand-colored with watercolor) are lush and inviting.  Ubiquitious is certainly deserving of its multiple starred reviews!


Of course, all of her titles rise to the top.  Dark Emperor, Red Sings From Treetops, and Butterfly Eyes. And be sure to check out her latest, Swirl by Swirl  Each and every one a jewel that should be read over and over!

Photo of the Day - Yellow 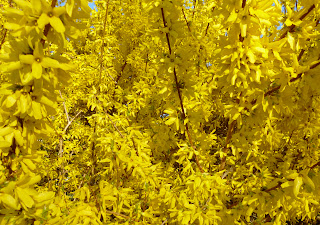 When I interned at Audubon Magazine, then under the direction of the wonderful Les Line, I helped edit a photo essay on the color blue.  What an amazing experience.  I was the first one to open all of those spectacular packages of transparencies from photographers I had always admired.  Helping to select the photos was an experience that taught me so much.

Seeing this forsythia in such a spectacular yellow brought that color essay back to me.  I began to think about all the things in nature that are yellow.  Daffodils, buttercups, caterpillars, dandelions, goldfinches, warblers, and the ever beautiful sunflowers.

It's fun to focus on one color in nature.  You begin to see that color everywhere.  What a treat for your eye!

For me today it is yellow.